Machinery dealer Hamilton Tractors will celebrate a sales landmark with an Open Day in April at its Carnwath premises in Lanarkshire.

Jan and David Walkinshaw have supplied 100 tractors since taking on the Landini and McCormick franchises and were presented with a plaque commemorating the achievement.

Most of the tractors have been bought by farmers and agricultural contractors but the milestone machine – a 143hp McCormick X6.460L – is operated by civil engineering firm Ward Plant Group and is currently working on the A9 upgrade near Aviemore. 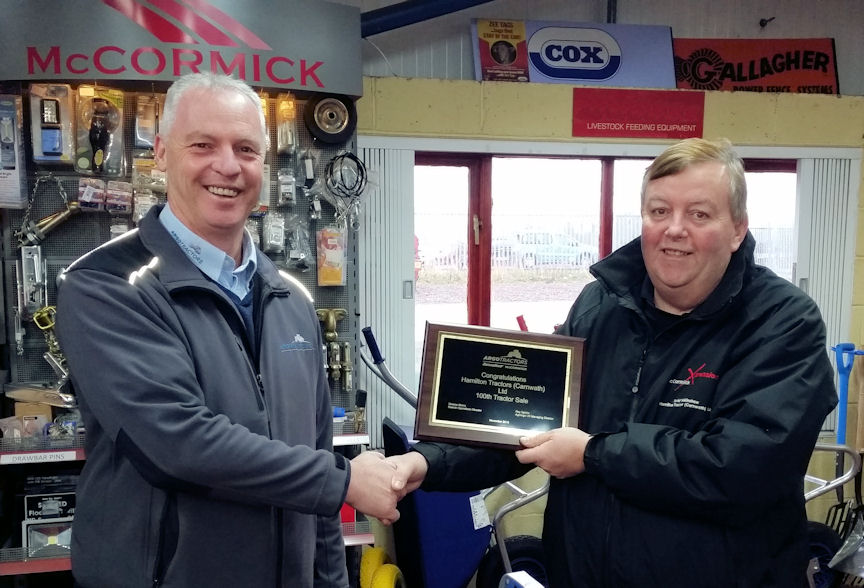 “Hamilton Tractors has proved to be a good choice for our dealership in the area,” says Bob Bain, area sales manager for Scotland at distributor AgriArgo UK. “David Walkinshaw is an enthusiastic salesman and he is backed by parts and service people who know how to look after his customers.”

The Hamilton Tractors business was bought by Jan and David Walkinshaw towards the end of 2008, selling just farm machinery at first before being awarded the McCormick franchise for Lanarkshire and Midlothian. Two years later, AgriArgo added the Landini range to his portfolio across a wider territory.

“In most parts of the country we have quite separate dealers for our Landini and McCormick product lines,” points out Bob Bain. “But because of his proven track record with the McCormick franchise, we concluded that David and his team at Hamilton Tractors was well placed to also supply and support the Landini products.”

The business has supplied a number of Landini tractors since then, most recently the first Landini 7-175 V-Shift in Britain. This new high-spec model has a CVT transmission, a touch-screen display for settings and adjustments and a powerful engine with 171hp for draft work and 181hp for other applications.

The Landini and McCormick ranges have been transformed after parent company Argo Tractors began a €75 million, three-year R&D programme developing as many as 10 new and improved designs across the board from 64hp to 212hp with new semi-powershift transmissions and also CVT drive for the first time.

Examples of all leading models in the Landini and McCormick ranges will be on display at the Hamilton Tractors Open Day on Wednesday, April 6 along with machines from the dealership’s equipment franchises, which include Abbey slurry tankers, Abbey feeders, Fleming trailers, Krone and McHale grass harvesting machinery, and Quicke and Twose loaders and attachments.

In addition to all-day refreshments, farmers and contractors visiting the event will enjoy a 10% discount on all parts orders and other special offers.

Full story can be found here >>